Taking the “Free” out of Freelance – Part 1

Freelancers have often struggled to collect pay from unscrupulous companies and individuals who hired them and then took advantage of the freelancers’ vulnerability. Thanks to a new law, much of that will change in New York City.

The New York City Council recently passed the Freelance Isn’t Free Act (“FIFA”), which will take effect on May 15, 2017.  This law protects freelancers by requiring that they receive written contracts and timely payment.  Someone who fails to pay a freelancer in violation of this law will be liable for double damages, the freelancer’s attorneys’ fees and more.

This law represents an important advance, because until now, unpaid freelancers could only sue for what they were owed under the contract.  This was often not worth the trouble, because in cases where the unpaid compensation is relatively low, the cost of hiring an attorney could outstrip the potential recovery.  Attorneys who handle cases on a contingency fee basis (generally collecting 1/3 of the recovery) are often reluctant to take on small claims because they will recover very little for a lot of work.

In this first blogpost on the FIFA, we explain what the law will protect.  The second half will cover how freelancers can enforce their rights.

Here is what the law protects:

The FIFA protects any freelancer who is hired or retained as an independent contractor by a hiring party (defined below) to perform services for compensation.  The freelancer can be a natural person or an organization, even if the organization is incorporated or uses a trade name, but there must be only one person in the organization.

Who is Not Protected?

Some professions are excluded from protection under the law.  They are:

Who is a Hiring Party?

Any person who retains a freelance worker to provide service.  The courts consider corporations to be persons.

Who is Not a Hiring Party?

Requirement of a Written Contract

Whenever a hiring party retains a freelancer for services valued at $800 or more, a written contract is required.  Freelancers who perform multiple small jobs are protected, because the law permits them to add together all contracts for services between the same parties within the previous 120 days to meet the $800 threshold.

Both the hiring party and the freelancer must retain a copy of the contract, which, at a minimum, has to provide the following:

The Director of the NYC City Office of Labor Standards may issue rules adding further requirements.

The hiring party must pay the contracted-for compensation to the freelancer on or before the date it is due under the contract. If the contract does not specify a date for payment or a mechanism for determining that date, then payment must be made no later than 30 days after the freelancer’s completion of the work.

Once the freelancer has begun work, it is a separate violation of this law for the hiring party to require the freelancer to accept less compensation than required under the contract as a condition for timely payment.  In other words, a hiring party cannot lawfully say, “I know I owe you $1000 but I can’t pay that by the due date; if you will agree to accept $750 in full payment, I will pay on time.”

These anti-retaliation provisions are very broadly worded and are evidently intended to incentivize hiring parties not to retaliate.  Note that a freelancer who has been paid under the contract but experiences retaliation from a hiring party can sue that hiring party.

Freelancers should keep all these protections in mind as they negotiate contracts and work for hiring parties. 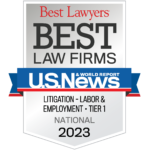